I have taken it upon myself to be the curator of the ever-expanding ‘mon cosmos. It is my intention to keep track of all of the mechanical developments, and eventually cobble a system from the scraps if I can. (Though may I say, with Anni’s new battle system, I think we’re in a good spot for ‘mon stats, and we should move onto things like classes and mechanics like Arkos’s Mutagens!)

In the meantime, here is my newest contribution. Instead of knocking every ‘mon senseless, there should be an inherent challenge of discovery in figuring out how to get a ‘mon to join your troupe. Here are d20 ways to get a ‘mon in your gosh darn Legaball!.

d20 was to get a ‘mon to get in the gosh darn Legaball:

1 An oldie but a goodie: knock it unconscious in battle

2 Kill it dead; it will return as a Ghost-type version of itself

5 Stroke its ego; let it beat your best ‘mon

6 Find an item of symbolic or emotional significance

7 Keep it captive for its RANK in days

8 Sacrifice something to the ‘mon in worship

9 Read the ‘mon a story or poem, perhaps a particular one

10 Make a positive memory with a ‘mon

11 It’s doing some sort of job, stop it from doing that job

12 It’s being prevented from doing something, help it achieve its goal

13 It’s bored, give it something productive to do for a while

14 It’s being forced to do something, help it stop

15 Electrify, poison, mutate, or otherwise harm the ‘mon in a particular way

16 Heal the ‘mon of a troublesome wound or ailment

17 Help it get back at another ‘mon

18 Help it win the admiration, love, or friendship of another ‘mon

20 This ‘mon simply doesn’t like you, and would rather die than serve you

(Use dispositional cues and trial and error to figure out what’ll work! Most ‘mon respond to 2 or 3 approaches, not just the one.)

The Dream Web: Since ‘mon are at least partially psychic entities, they can survive without physical form, as long as they are being thought about. If you’re particularly poor or desperate, scientists have developed Somnolence Chambers for you to take long-term residence in (risk of muscle atrophy and brain ballooning included). You’re put into an artificial coma through the use of powerful sedatives, and the free space in your brain is used to house ‘mon. The Dream Web is the collective name for this ‘mon storage matrix. It’s mostly safe to use, but rather expensive, and occasionally results in you getting back more ‘mon than you put in…

(I would imagine that you can probably only safely keep 6 ‘mon in the Web at a time: more taxes the brainpower RAM you’ve been assigned, and if you want to rent another Podder, it’ll cost you steeply...)

Legaball/Eidoball: These multifaceted chunks of vaguely-spherical crystal have special runes and impurities carved into them that make them work like small neural networks with the introduction of a lot of energy. Thus, they can store one ‘mon at a time each. Some balls are made of particularly resonant crystals that give them special capabilities, like the Ow Wow Ball, which is better at catching wounded ‘mon because of its Blood Quartz composition.

The Legadex: Foul magic power these arcane grimoires, massive tomes bound in rotting flesh and covered in pictographs. They catalogue each ‘mon a trainer discovers in real time, with physiological and personality data. Each trainer must cut their palm and bleed on a ‘dex to bond it to them, thus inducting them into the occult world of the ‘mon.

Can’t wait to keep this up!

This is the first part of a potential three-part series, depending on the reception of this post. Three disclaimers: This adventure is fairl... 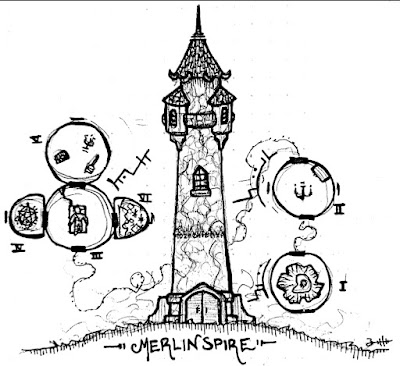