The Dividends of Research (Pb)

I have good news! I’ve hired an Iodinian scholar by the name of Lara Beudenchamp (the Illuminated, third of her name, Principium Anathetor, et cetera) to answer some of the questions the shadows whisper to me right before I fall asleep. Unfortunately, she charges by the hour, and I have very little gold lying around my house, so this is all she could come up with. I hope it helps you, at least a bit.

What is the Red Word?

When I feel those eyes on by back,

Tongues aflutter with my misdeeds

Their eyes upon me, needles, needles

What corner left in my soul holds that spark

Of joining with a whole I know

I was born in the shadow of?”

-The diary of an infamous heretic known as Stitchley Hatters.

Who are the Red Hierophants, blessed be?

“TO PASS BILL INTO LAW EVER-BINDING:

Each party on the Council, starting with the Red Hierophants, blessed be, scribes a single word in iodine onto the beatified tablet before delivering it to the next party. Once a majority of the Council votes to end the scribing process, the tablet is heated and the law revealed. Only a unanimous concursion can abolish such a law, so laws are written almost as scarcely as they are vetoed (for an example of the last such occurrence in history, see the Second Defenestration of Turgendaal in Subsection III). Of course, codes are another matter entirely; for reference, please see Handbook 22A: “On Imperial and Sub-Imperial Codes”.”

-An excerpt from ‘the most tedious book in the Athenaeum’, as decided by a surveying group of students at Mordent University

“Yeah, I was wondering the same thing! Why won’t this guy answer any of our questions with a straight answer?”

-I don’t know how Deus Ex Parabola’s strawman ended up here, but I’ve heard that salt circles can keep it away? Please let me know if you have any tips; I hate it so fucking much; this explains why Deus has gone mad;;

What other constellations did Saint Copper imprison?

“This is an all-too-common misconception; Saint Copper imprisoned none at all. After battling a Thing From Beyond and losing an eye in the melee, Saint Copper beseeched the Great Bear to guard the firmament against the incursion of further violators. Each of the other stars are the Great Bear’s fetal progeny, and one day, they will all grow as strong as their mother, and return from their thrones clad triumphant with the blood of the last of the Things From Beyond, and we will drink and rejoice and shed our skins to join them in starstuff. Easy mistake to make, especially in this day and age.”

What’s in the Æther?

“Y’ever seen one of them turtles? Sorry, no, not turtles, but they look like turtles, at least when you’s far away. But when ya get up close to have a good look at the buggers, it’s like their skin is… moving. Alive wit’ little gnats ‘n ants ‘n whatnot- hunnerds, thousands, too many to count. An’ they just live like that. Carryin’ these little folk wit’ em wherever they go, sharin’ their food n’ everything. And then the strangest thing happened- one day, I dropped a brush n’ all the little buggers scattered, an’ it was a skull in there. Imagine that! There was nothin’ under there at all, was the little bugs moving the skull along.”

What the fuck is an elf?

“Stop asking me! Do you think I fucking know!?”

“In your words, speak truth, but whisper.

In your deeds, be generous, but unflinching.

In your thoughts, be steadfast, but incorruptible.

In your flesh, be staunch, but meager.

And in your soul, be steel and lead.

Let me tell you a tale, my children, of the Mother in the Star...”

-The first words of the Codex Periodicum.

Where did the dragons go?

“DAY 49: Subject has begun to shudder violently to an unidentifiable rhythm- perhaps akin to a heartbeat, though no investigation has revealed the presence of a cardiovascular system. Also has begun secreting a fluid smelling faintly of gasoline, currently being chemically analyzed by the Rats. Omens of natural disasters written in Heretic and inverted archaic Chemoglyphic have begun appearing on the walls of the containment unit. We request more lead so that the holding chamber may be reinforced.

DAY 53: Subject’s shuddering and secretions have ceased, and the transmogrification appears to be reversing itself, though the carvings and placoid scales remain a part of the Subject’s flesh. Subject appears to have an insatiable appetite for its own offal. It has begun speaking Chitter again, and begs for us to let it out of the chamber. We have received strict orders from the Black Hierophant to not accede to its pleas, though I can’t help but feel pity for must obey my orders in service of the Empire.

DAY 54: Code Double Red. In response to the hypnotic stimulus, an Acolyte released the Beast Subject from its cell. Motecrackers have been deployed to our location but it won’t be enough it never is abandon all hope may She have mercy on our damned souls why did he release it WHY DID HE RELEASE IT”

-Partially burned records recovered from the wreckage of Outpost Omega.

Are you satisfied yet?

Fine. Here. Are you happy? 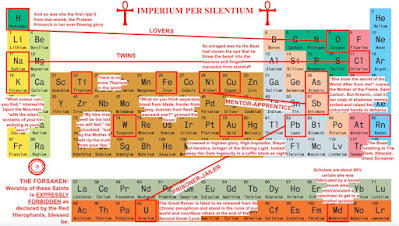 The Dividends of Research (Pb)

I have good news! I’ve hired an Iodinian scholar by the name of Lara Beudenchamp (the Illuminated, third of her name, Principium Anathet...